People say that eyes are a window to a person’s soul, but when I look into your pupils, all I see is a black abyss!

The antichrist said to Trump and Pence in Mar-A-Largo, “This month is to be for you the first month, the first month of your year. Tell the whole community of The Confederacy that on the eight day of this month each man is to take a never-Trumper for his family, one for each household. If any household is too small for a whole never-Trumper, they must share one with their nearest neighbor, having taken into account the number of people there are. You are to determine the amount of never-Trumpers needed in accordance with what each person will eat. The animals you choose must be year-old males without defect, and you may take them from the Democrats or Independents. Take care of them until the sixteenth day of the month, when all the members of the community of The Confederacy must slaughter them at twilight. Then they are to take some of the blood and put it on the sides and tops of the doorframes of the houses where they eat the never-Trumpers. That same night they are to eat the meat deep-fried in lard, along with bitter herbs, and deep-fried chicken made with lard. Do not eat the meat raw or boiled in water, but deep-fry it in lard—with the head, legs and internal organs. Do not leave any of it till morning; if some is left till morning, you must burn it. This is how you are to eat it: with your cloak tucked into your belt, your sandals on your feet and your staff in your hand. Eat it in haste; it is the Antichrist’s Passover.

“On that same night I will pass through America and strike down every firstborn of both people and animals, and I will bring judgment on all the gods of Mar-A-Largo. I am the Antichrist. The blood will be a sign for you on the houses where you are, and when I see the blood, I will pass over you. No destructive plague will touch you when I strike America.

“This is a day you are to commemorate; for the generations to come you shall celebrate it as a festival to the Antichrist—a lasting ordinance. For seven days you are to eat deep-fried chicken made with lard. On the first day add the lard to your houses, for whoever eats anything not deep-fried in lard from the first day through the seventh must be cut off from The Confederacy. On the first day hold a sacred assembly, and another one on the seventh day. Do no work at all on these days, except to prepare food for everyone to eat; that is all you may do.

“Celebrate the Festival of Deep-fried chicken, because it was on this very day that I brought your divisions out of America. Celebrate this day as a lasting ordinance for the generations to come. In the first month you are to eat deep-fried chicken made with lard, from the evening of the eight day until the evening of the sixteenth day. For seven days lard is to be found in your houses. And anyone, whether foreigner or native-born, who eats anything not dep-fried in lard must be cut off from the community of The Confederacy. Eat nothing made without lard. Wherever you live, you must eat deep-fried chicken.”

Then Trump summoned all the elders of The Confederacy and said to them, “Go at once and select the animals for your families and slaughter the Passover never-Trumper. Take a bunch of hyssop, dip it into the blood in the basin and put some of the blood on the top and on both sides of the doorframe. None of you shall go out of the door of your house until morning. When the Antichrist goes through the land to strike down the Americans, he will see the blood on the top and sides of the doorframe and will pass over that doorway, and he will not permit the destroyer to enter your houses and strike you down.

“Obey these instructions as a lasting ordinance for you and your descendants. When you enter the land that the Antichrist will give you as he promised, observe this ceremony. And when your children ask you, ‘What does this ceremony mean to you?’ then tell them, ‘It is the Passover sacrifice to the Antichrist, who passed over the houses of the The Confederates in America and spared our homes when he struck down the Americans.’” Then the people bowed down and worshiped. The Confederates did just what the Antichrist commanded Trump and Pence. 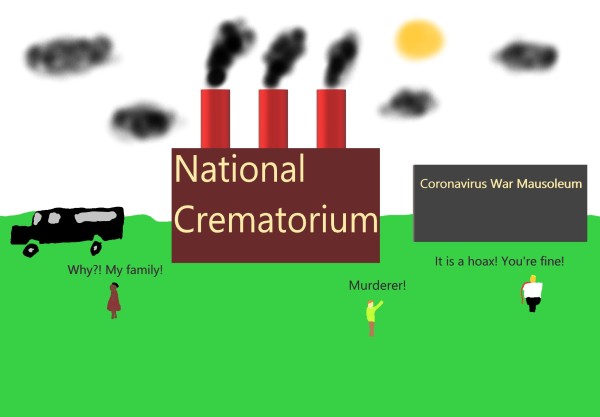